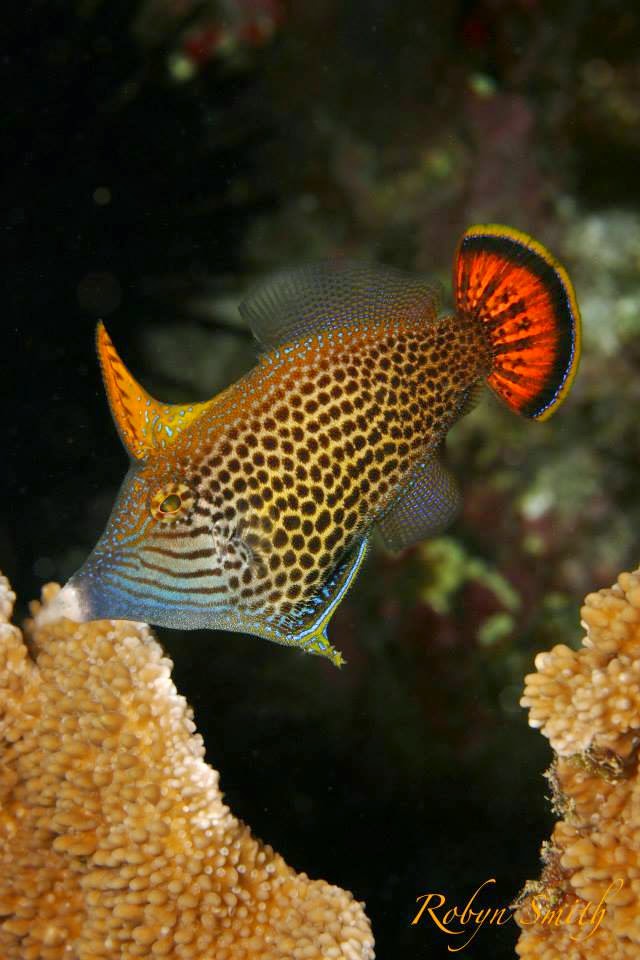 John P Hoover says, "... Fantail Filefishes are yellow, marked with black spots, and have bright orange, fanlike tails. Blue markings about the mouth and throat further adorn these beautiful little fishes. They frequently pair off in a head-to-tail position, raising and lowering their spines, and spreading their colorful tails in some sort of territorial or sexual display." -From Hoover's Hawaii's Fishes.


Robyn says, "The Hawaiian Fantail Filefish is one of the rarest fish in the world: Not only does it exclusively exist in Hawaii, but it's population goes through Boom-or-Bust cycles, making it all but absent from the reefs most years. The last time this magnificent fish was seen with any regularity was in the 1980s, but is again being spotted throughout the state this year. How very exciting is that?!"


"O'ili"- meaning "To Appear", "to sprout", or "come up"- probably taken from the single raised dorsal spine, or perhaps their tendency to appear in a sudden bloom and then die en masse and wash to shore. The Hawaiians of old supposedly thought the rare bloom of the Fantail Filefish was an omen of an upcoming death of a member of the royal family.
" 'Uwi'uwi" -meaning "To squeal" and eerily taken from the fish' squealing sound as they are taken from the water.

Posted by Kohala Divers at 3:58 PM