Learn about the Crown-of-Thorns Star

The crown of thorn Starfish are found on nearly every site we visit on the Kohala Coast. Divers often ask us after a dive "What was that cactus looking thing" or "was that a weed on the coral?" Read on for some info on these interesting invertebrates. 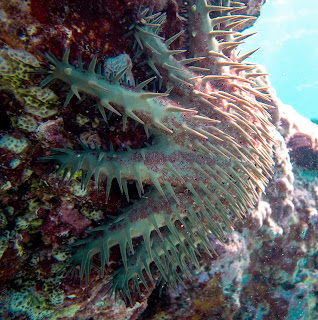 While enjoying the reefs of Hawaii and all their marine life, spare a thought

for the corals on today’s menu!

The diner is Acanthaster planci , Crown-of-Thorns star (COTS) and his

favorite meal is coral polyps, especially those of Pocillopora meandrina

spines. Don’t get too close...many divers will tell you of their discomfort

having inadvertently got too friendly with this star (burning pain, numbness

and possible discoloration of the area for a couple of days)! 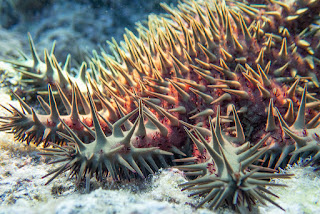 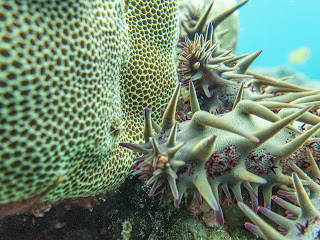 They are impressive creatures, using all of those arms to climb atop coral

colonies where they then extrude their stomachs and secrete enzymes to

remain, when they absorb the available nutrients and move on. True horror 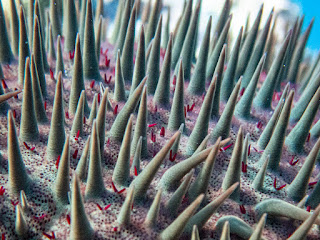 (including the Great Barrier reef), here in Hawaii we don’t appear to have a

big issue with them yet and usually, one won’t see more than a few at any

one site. In places where they have become a real issue, divers can

doing some good for the reef, feeding on some of the faster growing corals

(such as Cauliflower & Rice corals) and increasing coral diversity on

In Hawaii, their main natural predator is the Triton’s Trumpet snail; also

Harlequin Shrimp, Stripebelly Pufferfish and Lined Fireworms will feast on 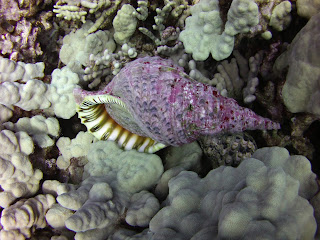 We hope you will get a chance to observe this impressive star, when diving

with us at Kohala Divers in Hawaii!

Posted by Kohala Divers at 9:25 AM